Immigration, Genocide and the Demonic 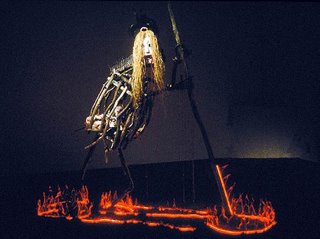 “… as Terence Des Pres once pointed out with regard to the Nazi’s attempted mass extermination of 's Jews, "demonic” seems a better word than "insane" to characterize genocidal behavior. [He noted that] "insanity is without firm structure, not predictable, something you cannot depend upon." And while "what went on in the [Nazi] killing centers was highly organized and very dependable indeed," thereby not qualifying as insanity, at least according to Des Pres’ informal definition, "the dedication of life's energies to the production of death is a demonic principal of the first degree."


As Danza Cauhtemoc began to dance, to offer their prayers in motion; as their drums rolled like machine gun fire echoing in the streets; as the counter-protestors cheered their arrival and the magic and spirit they have brought to countless demonstrations in Los Angeles over the course of many years, Minutemen and SOS members with cameras began to circle in, one by one, near to them. Counter-protestors did all in their power to block the racist’s cameras, sensing the lewd spirit within and behind the act.

Predictably, which is to say demoniacally - as Des Pres would have it - SOSers found a way to defile the ancient native spiritual traditions of the conquered subjects of Euro-imperialism, just as they had done months before in attacking the Danzas Indigenas monument in .

They added a degrading soundtrack to a video of the danzantes they were able to take from across the street, and created a vicious, demeaning, racist label for the sacred dance.

This elemental and fundamental fear and hatred of the Other, the titillation at its “strangeness,” the demented need to distance oneself from natural power, from color, from movement, from the body itself, is the endemic visceral sickness spoken of by Wilhelm Reich in his "Mass Psychology of Fascism,” his guidebook to the psychic nature of the civilized evil called Nazism.

It is this cultural psychology that led the Conquistadores to hang and burn Indians suspected of “heathenism” in groups of 13, in "honor" of Jesus and the 12 disciples. The same sickness led the European settlers who slaughtered a peaceful encampment at Sand Creek in to scalp the vulvas of native women and hang them on their saddle horns. It led US soldiers in to sever the ears and fingers of the "Gooks” they killed in what they called "Indian Country.” This same cultural impulse makes the SOSers call their opposition “Goons.” This impulse, when acted upon, has a name.

That name is genocide.

A sick fascination, an obsession with degrading the “Other” is the psychic compulsion, the very thing-in-itself-from which genocide arises. Racism as an attitude and genocide as an action are simply two sides of the same demented coin, two points on a single continuum, the beginning and end points of a deadly circle.

There can be no question that for the sick men who carried it out, the scalping of native women’s vulvas was “funny.” Some stretched the fetishes around the crowns of their hats. They laughed.

An SOSer who calls himself “Border Raven” suggested adding animal sounds to the soundtrack. “I’mwithya” posted the lyrics to a children’s song about chickens, saying “This should be the song for the AZTEC DANCERS!”

In the demonic logic of racism, to degrade the other is to equate the other with oneself – with the secret evaluation of oneself that one hides from oneself. It is to project what is “evil” in oneself, what cannot be faced, onto the Other. The “demon” demonizes the Other – reduces, limits and frames the Other within the same parameters of obsessive hatred and degradation that define the limits of the “demon’s” own awareness.

The Other can be allowed no existence beyond the limits of an imagination seething with self hatred.

The “demon” cannot see what it is not, and having contempt, but not compassion for or understanding of itself, it can have no such feelings for others.

Cazamigrante wants to dress up in his own “chicken suit”, wants to reduce the Other to a mirror image of his own self contempt. Or better yet, to become a parody of a slaveholder – a Colonel Sanders - a parody, a mockery with the power to kill, an evil clown with a necklace of severed ears and fingers; like Colonel Sanders, a professional butcher.

The Hopi have a word for those with such a mentality – the powaqa. A powaqa is a sorcerer, one said to further his or her own life by stealing the hearts of others.

According to Godfrey Reggio, maker of the films Koyaanisqatsi, Powaqqatsi, and Noqoyqatsi, “…a Powaqa is a black magician—a person who eats the life of another person in order to advance his or her life. The modus operandi as it were of a Powaqa is allurement and seduction. I felt that when you put those words together [Powaqa and qatsi – i.e. “life” or “way of life”] they mean a way of life that consumes another way of life.”

A way of life that consumes another way of life is genocidal, by definition. It is the way of life of the West, the way the minutemen and SOS want so desperately to preserve from the “degrading” presence of Native peoples, who - as SOS puts it in another comment typical of Hitler’s - are turning “” into a “cesspool.”

All such stigmas and stereotypes, of course, tell a story. They tell a story that justifies the cruel oppression of those who are stigmatized. In the case of Native peoples in the , and in the case of the Jewish people in , that story led to mass death. There is nothing “innocent” here. No one is “just joking.”

The SOS / minutemen “joke” at the danzantes expense has a point. The point is to embolden and desensitize those who would round up Mexican people by the millions, deport them, or put them in camps.

The purpose of the joke is to enable these racists to support, for example, pending legislation in Congress that calls for all undocumented migrants to be declared felons - just as Jews had to wear a yellow star, and just as “stateless” people had to wear a blue triangle under Hitler.

These “Americans” cannot admit that they are repeating the tales and way of life of their own ancestors. To see it would be to admit the correspondences of history, to shine light on the shadow, to admit to the practice of genocide.

The final purpose is to distance themselves and others from the human meaning of their actions. By dehumanizing the danzantes, and, by extension, all Native people, SOS and the minutemen are up to nothing new. What “American,” after all, has ever worried about wringing the neck of a chicken – or any other “sub-human.”

The sub-human, for such people, cannot be sacred, nor can the culture or spiritual practices of the sub-human be sacred. To admit of the sacred is to admit the common humanity of one’s intended victim.

And that is the one thing the powaqa and the white American ubermensch can never do.

We can but fight them, and pray that their hearts are delivered from the grip of hatred.

The Powaqa has no heart. No matter their depravity, they see themselves as fine, civilized people. They destroy everything normal, natural, and healthy, because that is the only way they can feed their cancerous malignancy.