La Tumba del Mojado: A Message to My People 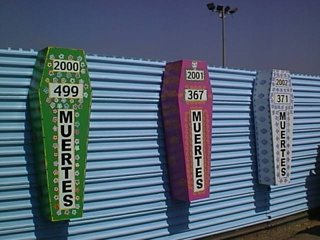 
They died, frozen in the mountains, thirsting and hallucinatory in the desert. They died trying to cross the border while evading the hated Tortilla Curtain - the Wall between the US and Mexico that spans a length of the California border.

4,000 have died, mostly in the Sonoran Desert of Arizona, and it was not a Cazamigrante, a wild Republican cowboy or a radical white Christian Fascist who killed them. It was former President Clinton of the Democratic Party. That’s who built the Wall.

And every migrant who crosses to el otro lado knows it, that “la linea divisoria
es la tumba del mojado.”

And now we have our own ‘leaders’ urging us, begging us, to trust the very people you knew could kill you when you crossed.

They are wrapping our wrists in razor wire and applauding a bill - a so-called compromise, one that will do nothing but make matters worse for all of those without papers.

They are asking you to hope in the very people who set La Migra on your trail, who trained the dogs that hunted you through the night, who forced you to come, locked in the back of a truck, through the rapids of a turbulent river, through a tunnel dark with rats, through a sewer pipe, on top of a freight car’

We know it. The mass protests we have held sent an unmistakable message.

Los de arriba understood. Beyond and behind the white t-shirts and the bloody flags, they understood our message.

That’s the message that shook them.

That’s why they took a big step backward from making everyone without papers an instant felon; that’s why they thought twice about hunting you down, and deporting you to ‘detention centers.’ Or worse.

The hearts of the killers that built the wall on the border were not softened by American flags in the streets, nor by claims that this is a so-called ‘nation of immigrants,’ nor by pleas that ‘we are just like you.’

It is the answer to those questions that will determine how far they will go. There are no other questions. They are looking closely at only two choices.

One is to totally criminalize and hunt down our people.

The other is to lock you down right where you live and work, lock you into a peon style relationship under control of your boss (and of course, the government) and, as one writer put it, to make you absolutely ‘vulnerable to deportation at the merest hint of resistance.’

Of course there are variations on the theme - to criminalize some of us and hunt us down, while putting the rest under the strictest control.

But make no mistake. At the first sign that an economic decline or other crisis is on the horizon for the US, the government will try to take us all out - that’s exactly what happened during the Great Depression - mass deportation.

And make no mistake - when that happens everyone who’s signed up for the ‘earn your citizenship’ parade will be marked, like the Jews were marked by yellow stars before they were deported to their particular fate by the Nazis.

Tell this to our ‘leaders’: We don’t need to beg to be treated like human beings. The system takes our labor and gives little or nothing in return. As a people we’ve already ‘earned’ our right to live without being hunted like criminals. But the truth is, of course, that life without oppression, without racism, without poverty and alienation is our right as human beings - we never had to earn it.

What we need is not more ‘reasonable’ leaders begging the government to give half of us a tiny portion of what is ours by right, while they hunt down and deport the rest.


Juan Santos is a writer and editor living in Los Angeles. He can be reached at JuanSantos@Mexica.net

Posted by JUAN RAFAEL SANTOS at 1:26 AM