The Most Important Place 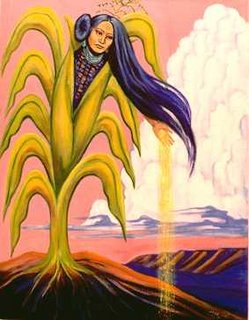 "They can’t take away the Farm”, a child had told her, “because where will the lizards go”?

Her first tour of the farm she says, was offered by a five year old and a 14 year old. They talked of each plant they passed, and gave its name in Spanish, English and Nahuatl. What she misses most is the years the children that played here, before the threat became too great.

“They can’t take away the Farm”, a child had told her, “because where will the lizards go”? “The birds need the lizards, my brother watches them.” In most of LA we see only crows and seagulls, but birds are everywhere at the Farm. There is nothing for them, no life on the flat topped roofs of the warehouse district.

She has a plot here now, and she grows her corn the way the Elders taught her, in the ancient way of the ancestors. In a circle; blue, yellow, white and red in quadrants. In the center grow the speckled ears, cross pollinated by the other four. This is the strongest she tells me, and is used for seed corn in the seasons to come.

I ask her about the Mayan farmers, and the tale I’ve been told that they have heirloom seeds of maiz, the tlaolli whose ancestry can be traced for hundreds, even thousands of years, and I wonder silently about the Quetzalxilotl, the precious, original maiz brought by the ants to Quetzalcoatl. Our ancestors said corn stalks formed the hair Mother Earth.

“Everyone here has those seeds”, she says, and it is something each family knows and deeply treasures; they can tell you the number of its generations, and the places it was sown by the antepasados.

Our talk turns from the ancestor’s traditions to their prophecies, and from there to peak oil and global warming, to mass extinctions, to the wars and the developments toward fascism the wealthy are using to prepare themselves to remain on top, even as the mad dance called civilization reaches its manic and suicidal crescendo.

She has given me a minty leaf to chew, and as I take in the beauty, the nopales, the medicinal herbs, the quiet, elegant courage of the campers, those ready to face arrest, and the tender quiet passion of the young who have found something here they have always wanted and have never been able to name; when I long for them, those I have embraced, not knowing their names, those who are ready to stand til the end for this earth and what lives here; those who have answered the call of the ancient ones who came before them; those who have seen this once what it would mean to live connected to Earth and one another in love; then I know.

Posted by JUAN RAFAEL SANTOS at 5:58 AM