A Magic So Strong: The South Central Farm Must Live 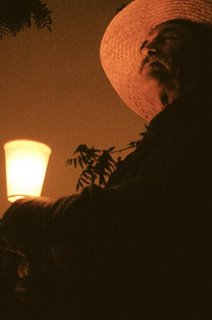 This weekend the LA Times issued a deadly editorial attack on the South Central Farm, justifying the destruction of the land and the community, overtly using the theme of "property rights" to do so. Such assessments cannot be allowed to hold sway. Too much is at stake, for all of us.

"Having now a collective name, we discovered that death shrinks, and ends up small on us. The worst death, that of oblivion, flees so that the memory of our dead will never be buried together with their bones. We have now a collective name and our pain has shelter. Now we are larger than death..." - the Zapatistas, , March 12, 1995

He was a real estate developer and a politician. He had been a high ranking soldier, and the Natives named him "Town Killer" for his practice of razing their population centers and burning their crops so the land could be taken by the colonizers, especially by the wealthy – the land speculators themselves.

His other name was .

Laws, treaties, and one’s solemn word meant nothing to the men who seized the land and murdered and starved its former inhabitants. The wealthy men who burned the villages and crops weren’t, shall we say, "nice."

Their spiritual and cultural descendants aren’t nice either.

The Los Angeles Times tells us in a recent editorial that it would be "nice" to keep the nation’s largest urban community garden, LA’s South Central Farm. They admit to the Farm’s beauty in the midst of the urban devastation of the South Central ghetto. They admit that the farmers have made their plots into a "special, almost magical place."

They admit it the way the English colonizers admitted the "Red Man’s Nobility" – as something that had to be destroyed in the interest of "progress."

"There are lots of things that would be nice," the Times opines, "but the land belongs," they claim, to a real estate developer, "and he has every right to kick out those who have been squatting there…"

The Mexican Indian hero Emiliano Zapata had a different idea – that the land belongs to those who work it.

On that premise, a premise Zapata paid for with his life, communal lands called ejidos developed in , protected by its constitution. That is, until NAFTA. Since then some six million indigenous farmers have been driven from the land, often at the point of a gun. They were driven out in the name of profit and progress to starve, to make their way in the lost cities of , to the alienated ghettos and barrios of LA.

But here, at the South Central Farm, Mayan farmers gave new life to ancient heirloom seeds, a rebirth and renewal of a heritage of that has continued, uninterrupted, for thousand of years; since the time before; since the ants taught Quetzalcoatl to grow corn. With others, these farmers grew corn and community.

The LA Times wants them driven out again.

"No magic is so strong," they say, "that it erases a land owner’s right to his property or its fair value."

The LA Times is looking for its Town Killer, for someone to burn the crops and destroy the people.

The Times wants them driven out like Indians everywhere – from the land – to the cities, and then, at last, even from there. It wants them "disappeared."

This is the Times’ rationalization for their stand – they imply, using a journalistic sleight of hand, that the courts awarded multi-millionaire real estate developer Ralph Horowitz the right to the land.

Unfortunately for the Times, the court did no such thing. The court, instead, gave explicit permission to the LA City Council to violate the Los Angeles City Charter in order to award the land to Horowitz, if it saw fit to do so.

The Times’ impulse is to honor a corrupt back-room "gentlemen’s agreement." Anything and everything is for sale – including the City Charter. This pretense of "justice" rationalizes the Times’ community-killing instinct.

Remember; "Laws, treaties, and one’s solemn word meant nothing to the men who seized the land and murdered and starved its former inhabitants. The wealthy men who burned the villages and crops weren’t ‘nice.’"

They were, like the Times, killing communities – or, if you prefer, committing various forms of genocide.

For the farmers themselves race and genocide aren’t the core issue – Life is - and they don’t want to be distracted from Life.

The Farm is a community, as independent journalist Leslie Radford has noted, "where plants and people grow."

The Times says it’s time for the Farmers to go.

The world itself is on the verge of destruction and ecological collapse as a result of such "logic."

The Town Killer’s system is destroying Life - destroying us - everywhere on the planet, and here in its next intended victim is the South Central Farmers.

The Times’ editorial, "Los Angeles Gothic," is subtitled "The Value of Property."

It’s time they learn a different lesson: The Value of Life.

It’s time we all learned the lesson of the South Central Farm.

It’s time to replant the magic: everywhere on Earth.

Posted by JUAN RAFAEL SANTOS at 1:42 AM

Yes you are so right. The government displaces many people in it's quest for profit. More and more people are going hungry while the FTA allows the cost of food to go sky high. Farmers are being driven off their land, and not allowed to produce, so we are forced to import most of our food at a high cost to consumers