The Language of Life: Reflections on the South Central Farm 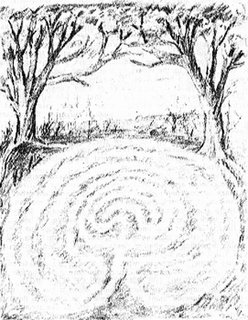 "...The root cause of the problems that threaten life on earth is the concept of land title acquired and maintained by force. Since modern civilization is based on this concept, it does not hold the key to peace." - Hopi Elder Martin Gashweseoma

It’s the way they always did it, just the way we expected; they raided the camp just before dawn. Their aim, as always, was to uproot us from the land. They’re good at it. They’ve been practicing on us for hundreds of years.

They call this place the South Central Farm, but there’s another name, a name everyone of us knows, even if it never crosses our lips: this is Indian land.

Let’s be very clear; this is not , or Jan Perry Land. It is or or . It is Indian land. It is first and foremost Tongva land. In LA, we _all_ live on Tongva land: It is also land that Mayan and Mexica farmers work and pray for; where their altars stand.

A new community has been born of this place, born of those who work the land, whose prayers arise from it, and from those who have come here, and who felt the claim of the land upon them and who have stayed, therefore, to defend it.

For many who have come, it is their first experience of the power of Place to shape personality, meaning and culture. For many, these last weeks defending the land have been a first: the most intimate and immediate experience of community and place – and thus of _home_ - that they have ever known.

This is hint of what it means to be an indigenous people, a people born of the land, shaped by it, to have one’s culture arise from it, to belong to it, the way a child belongs with her parents and is shaped by them, flesh of their flesh. This is what it means for the Earth to be our Mother.

The Farm is a dream made flesh, the promise of a place to be human together, an antithesis and counterpoint, an inevitable opposite to life as we live it in , an indigenous antithesis to the ways and means of empire.

Capitalism was born from the usurpation and seizure of land – peasants driven from the land became helplessly dependent on factory work: with no other means to survive, they became virtual slaves of the factory owners – the capitalists.

Capitalism began with the seizure of the land and “resources” of Native America, and with the mass enslavement, first of Native peoples, then of Africans, who they used to force production from the mines and the fields they had stolen.

From its beginning, civilization itself – city life - has been based on the seizure of land by both force and deception, the subjugation of land-based indigenous cultures, and the imposition of totalitarian measures over both land and labor that the city-state and its descendants demand. The story of the South Central Farm is among the oldest of stories, one that lays bare the most elemental bases of both class society and genocide.

The Farm, during its occupation, was a liberated zone, a zone where both the rules and the rulers remained locked outside. On the inside, a new culture was being born: the Earth was claiming us; the flowering plants, the scent of copal, the veladoras of the vigils, the Rancheras and the prayers to the Four Directions met the tree sitters, the media techies, the anarchists and Greens.

Somehow, we belong together; somehow we began to blend, even more often than we collided.

The Farm has brought ancient truths and traditions together with high school youth who have the taste first taste of freedom on their tongues. It has drawn the most conscious elements of the city together in a single space, not in anger, but in love for what has been born here. Not for an abstract “freedom,” but a concrete one. Not for a future “Socialist Man,” but in a living community.

The Marxist left has been notably absent. But on the day of the raid, two revolutionary Marxist youth brought out a big US flag and stood on it in the street. They meant to elevate the consciousness of the “masses,” they said, to the level of the vanguard – as if the people present didn’t understand that the system – any system – that would destroy the Farm and its culture is a sick system that has to go.

They noted with assurance that they had come “speaking the language of the masses” – in this case, they said, “Spanish.”

But the people of the Farm don’t speak that language. They speak Earth. Soil. Maiz. Tomate. Nopal. Yerba Buena, and the sound of children laughing.

It’s not the same language at all, just as industrial warehouses staffed by the industrial proletariat isn’t a garden, and just as a diesel truck or a bulldozer isn’t a hoe, a songbird, or a row of beans.

A young Chicano still in high school told me one night as he stood guard at the Farm’s gate that he had never known how unnecessary all the “stuff” of civilization is. He’d been ashamed, he said, of his family in , and of himself and his heritage. But now he understood; they have little but are in touch with the very processes of life. One night on the Farm he had heard an Elder speak of the ancestors and the stars, and he knew now, he said, that our ancestors are present, watching and bringing us light.

I held him a he wept disconsolately on the sidewalk outside the Farm the night after it was raided. There was mostly nothing I could really tell him. When he was able, I guided his hand to a vine growing from the fence, and he held it, caressing the leaves, for a very long time.

A few days later, Farm supporters gathered at the edges of dirt outside the fence and planted flowers, sage and herbs. No one said it, but in that moment these young people became Farmers, creating life and beauty, which is Balance.

It’s not that we don’t need a revolution, and maybe, after all, this struggle should be more militant. It’s not that - It’s this:

We need a revolution because this is the language life itself speaks, this language of tenderness. And it must be protected and preserved.

Arriving at the Farm tonight, before finishing these thoughts, I parked behind a car that had a bumper sticker I’d never seen before. It said, “Revolution is Compassion.”
They understood.

The young man who had wept so sadly greeted me as I arrived with a hug and a smile. A little awkward, but as always, tenderly, he thanked me for coming.

A Black brother I’d promised to loan my copy of Marimba Ani’s “Yurugu” embraced me, even though I still hadn’t gotten him the book.

A woman farmer, una abuela, nodded as we passed on the sidewalk. “Buenas Noches,” she smiled. She made of it a melody. This, too, is the language of life.

And because it is, it cannot be defeated until and unless the madmen, the sadmen who run this “civilization” - along with its warlords, warehouses, pigs and death squads – destroy Life itself and all its Balance.

Try as they might, I don’t think they’ll be able.

The spirit of the Farmers is all the proof I need.

Posted by JUAN RAFAEL SANTOS at 6:02 AM